In Conversation with Blanca Schofield Legorburo, the Artist behind Eve Taking A Nude (@evetakinganude)

Eve Taking A Nude (@evetakinganude) is an Instagram based art project by third-year MML student Blanca Schofield Legorburo. Although Eve Taking A Nude was started in just May of this year, the account has gained over 1,700 followers in little over two months, and has recently expanded to sell prints and sustainable tote bags. As the name suggests, the project specialises in nudes – however, what is so unique about Eve Taking A Nude is that it relies on self-submission for its subjects. We chatted to Blanca about her art and what the response to the project has been like.

“I am so flattered and humbled by the trust that I’ve been given”, Blanca says. “I’ve received photos from many women I don’t know from different continents and it’s so lovely to be included in their process of embracing their beauty.”

“The relationship is friendly, but not too intense: they tell me why they want to get involved, I give them permission to send me photos and then I paint them and they tell me a bit about their story for the caption and I delete the photos! Sometimes we stay in touch to talk about flowers they’ve seen or friends who’ve been inspired by the page. It’s all very calm and trusting. I feel very lucky to have been able to talk to and paint all these amazing people!” 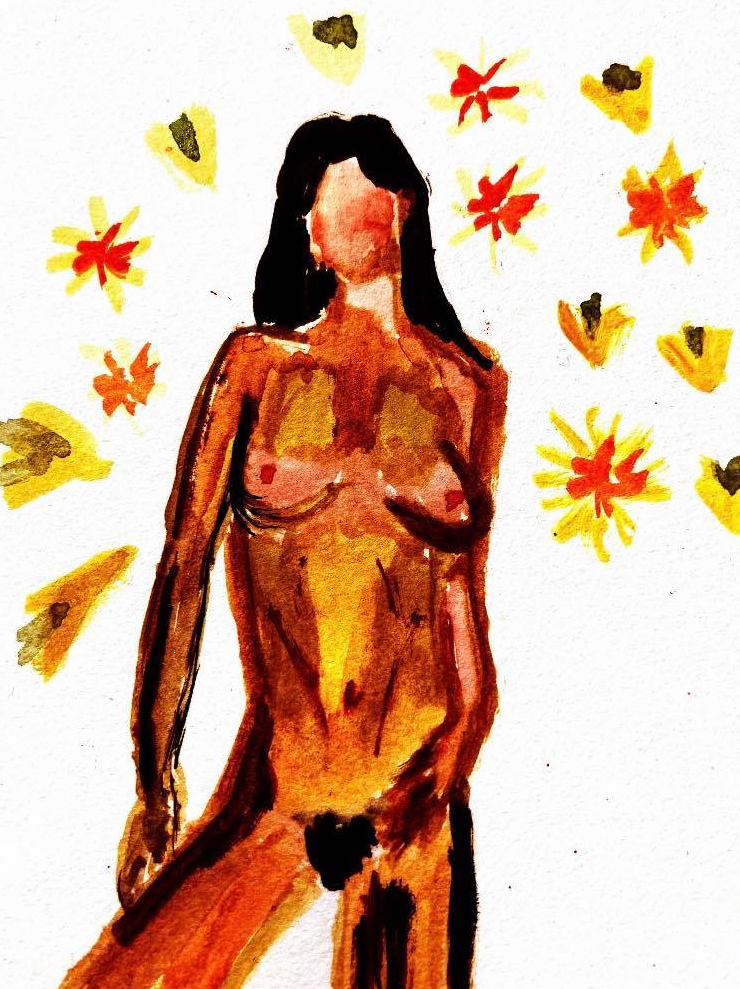 After a lifelong love of art, Blanca started painting frequently again on her year abroad. “I’ve always loved art, but at Cambridge I didn’t have the time or confidence to paint and I focused on collage when I did engage with art. I think it’s very easy at school and at university to stop all your hobbies because you’re not a grade 8 or technically brilliant, especially when we have so many other things to do and ‘achieve’.”

“I bought a little set of watercolours before moving to Paris and during the nights when I was on my own in my room I would try and listen to podcasts and paint scenes that had struck me. These were usually everyday experiences, such as a colourful kitchen or living room or my hand drawing or pigeons walking along a pond in the park.”

“When I moved to St Petersburg in February I started painting my bath times. I would have a bath every night because it was so cold and I often felt under the weather and baths are so calming. One evening I painted my body in the bath and it came out so calm and honest. So I promised myself that I would start taking nudes for myself and painting them. I put this off until after the COVID panic, but when I was in London living with my sister in quarantine I was painting a lot and then one day I painted a nude with some flowers above it that I had seen on a walk and I jokingly wrote, ‘lol, it’s Eve taking a nude.’ Then I thought…this makes sense! And the next day I painted some friends and made the Instagram account.”

The name “Eve Taking A Nude” is evocative of the project’s exploration of the complex relationship between many women and their bodies, and its aim in displacing ideas rooted in biblical Original Sin.

“Eve traditionally is thought of as the seductress of shame, a manipulative temptress who forced Adam into misbehaviour and led us into an eternity of body and nudity shame. This narrative has been challenged by many feminists and artists over the years, but I think it is still so pervasive! This idea of blaming women and believing men is so subconsciously inherent in our societies. Victim-blaming, toning down women’s voices and appearances, sexualising women and then shaming them…”

Where the traditional nude depicts women as disembodied objects for visual appreciation, Eve Taking A Nude reclaims that image as a source of feminine celebration, rendering women’s bodies in Blanca’s trademark sunset hues whilst surrounded by flowers she has come across on her quarantine walks. “I guess you could say that I wanted to show that every street has its own beauty and there isn’t just one Garden of Eden that we were thrust out of because of some evil Eve!” 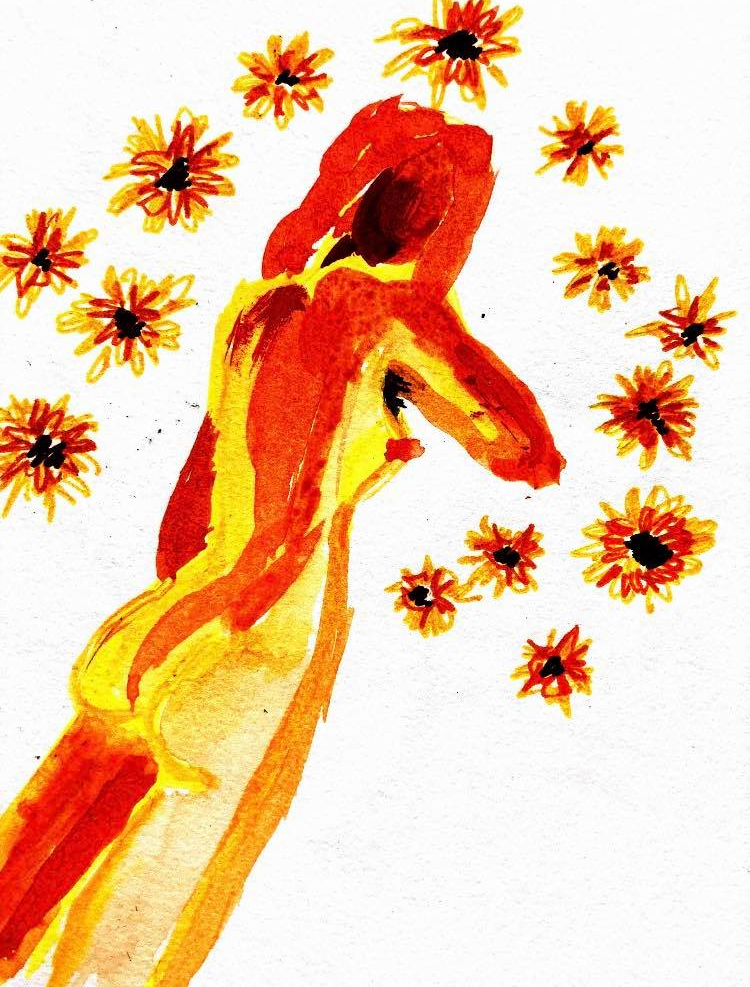 Integral to each piece on Eve Taking A Nude is the story behind it; each painting is accompanied by words from the model about why they wanted to get involved with the project. One model writes “Pregnancy, childbirth and breastfeeding take a massive toll on a woman’s body. I’ve always struggled with body confidence but since having my baby have learnt to embrace it. What others may perceive as flaws are the product of an amazing process I wouldn’t change for anything!” Another writes “In the picture I took, I wasn’t wearing any makeup, my legs were hairy, I have a bit more body fat, and I didn’t even notice. How lovely it is to just be able to ‘be’.”

In retaining the voices of her models so centrally in her artwork, the voicelessness of women in the traditional nude is subverted; more than an object of naked appreciation, Eve is restored her voice, identity and power, displacing “that all-time annoyance: the male gaze!!!”

At its core, this is the message of Eve Taking A Nude – reclaiming women’s bodies and its image for themselves, in all of their diversity.

“So many people love taking nudes for themselves! If we take time to look in the mirror and really see ourselves then our appearance can slowly become less pressurised.”

“We don’t do everything for sexual partners and for men! We are looking good for ourselves! There is no one perfect body!”

If you have an idea you would like to write for the blog, message us on facebook or instagram or email cambridgegirltalk@gmail.com! We would love to hear from you!