Conversations, Interviews
No comments on More Light: An Interview with Artist Issie Weir

Issie Weir was one of our featured artists at the Girl Talk Exhibition last term. I chatted to her about her paintings and finding time to create.

Hi Issie, thanks for agreeing to chat to me. Can you tell me a bit about the two paintings you had in our exhibition?

I exhibited “Flora” and “Ludo.” Both models are friends I study History of Art with.  I painted “Ludo” first, as from meeting Ludo on the first day of our course I had a really strong vision of how I would like to paint him. I wanted the portrait to be painted in a traditional style with strong chiaroscuro lighting and a black silk dress.  But in discussing the portrait with him the theme of the painting started to develop around the format of a traditional society portrait and how that could be challenged and played around with through androgyny, to almost play a trick on the viewer and require them to spend a little longer looking a little closer, something which we tend not to do when looking at the traditional society portrait hanging in the gallery.

With “Flora” the aim was a little different.  I had been to the botanical gardens during the Easter term when the orange sunlight was pouring through the glass roof of the conservatory and the colours were so incredibly bright and bold. I wanted to capture that, and Izzy was the perfect person to be captured in it as she has a similar vibrancy.  So we spent the next day in the botanical gardens, quite literally among the plants, embracing them at times, I imagine it was all quite amusing to passersby.  In painting Izzy, I wanted to try to portray a person, character, and emotional depth through light. Light is so fundamental to paintings and while in general it is praised and noted, its specific types and characteristics seem to go unnoticed, or are perhaps too personal to the artist or sitter to have an effect on the viewer.  I wanted to see how I could use its different and specific types and characteristics to express warmth or detachment, or to evoke a certain memory or feeling.  In “Flora” I wanted to capture that beautiful warm and yet bright light which was as much an aspect of her personality as the surroundings. I am looking at this interplay of light and subject matter more at the moment in a short film I’m making and am excited to see where it will lead me. 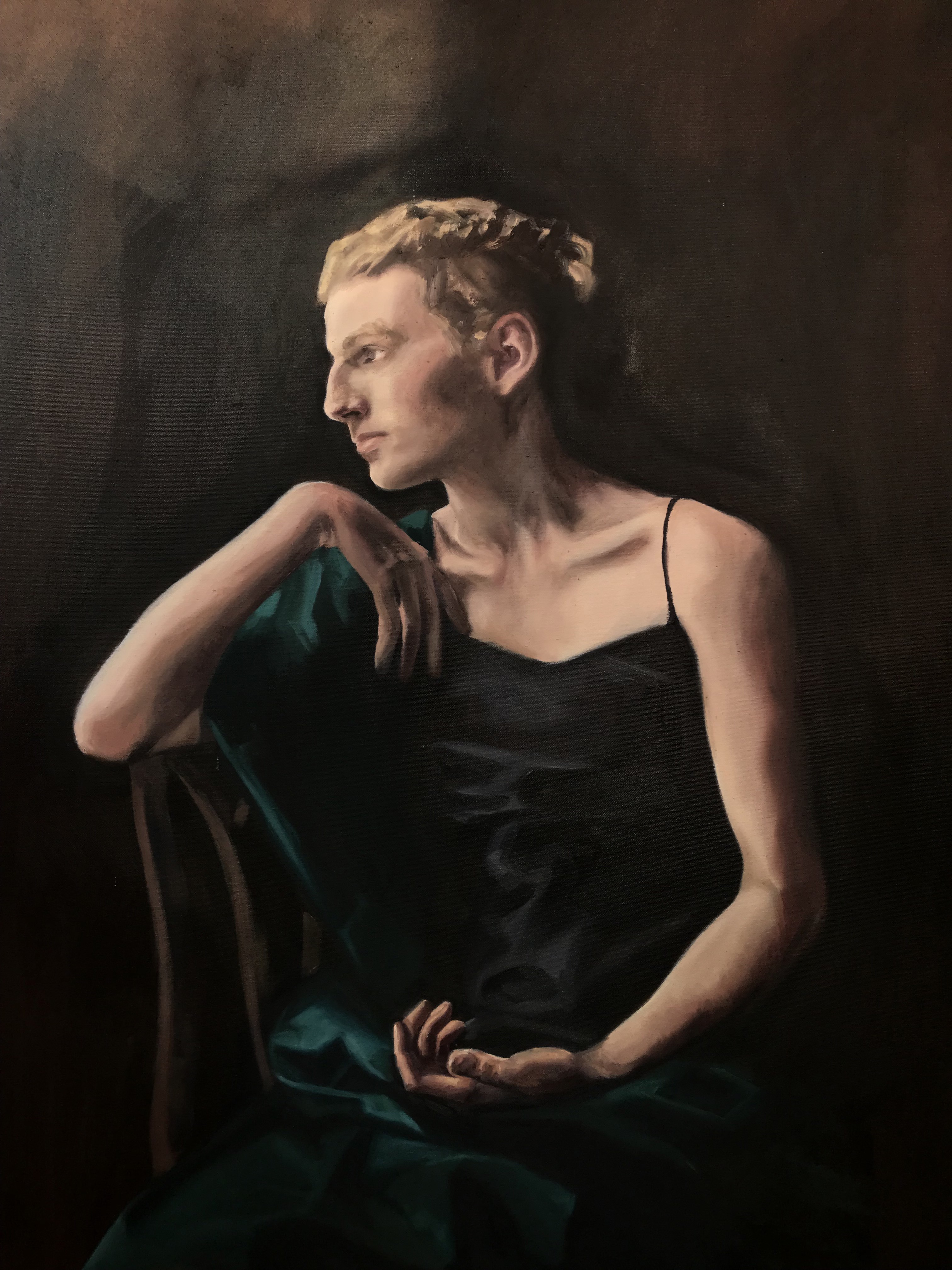 What is it that draws you to this style of painting?

It was interesting with these two as they were both rather dramatically different styles, one more “finished,” refined and naturalistic and the other slightly geometric and abstract. Both originated from the same classical method which I tend to follow.  I’ve always been drawn towards the more classical and “traditional” style of art, I find the illusion quite fascinating, particularly the realism of textures and drama in certain light effects which could only be produced with the depth and translucency that oils can achieve.  I just wanted to be able to replicate the artists that could do this, and so that’s been the style that I’ve tried to hone my technique towards and those more traditional and often renaissance artists tend to be the artists that I go to for inspiration.

In “Ludo” I’ve used a limited and cold palette in keeping with a traditional academic technique to create dramatic chiaroscuro lighting but one with an air of cold detachment and elegance.  On more technical note I chose this type of lighting and subject matter to give me a chance to have a go at painting silk.  The style follows a more traditional technique, which begins with a raw umber underpainting and is built up through a limited palette mixed into shadows, midtones and highlights, so this one is less experimental in style but perhaps more so in subject matter.  However, in general my style is still very much in a development stage and so I am trying to experiment and not get tied to any one style quite yet.

“Flora” actually just began as an underpainting on top of which I would refine the details so she would eventually have a similar finish to “Ludo.” However when I stood back and looked at it I really liked it as it was, the colors had just worked in creating the warmth I was going for, and I liked the contrast between the soft colors and the slightly more geometric lines. The result was something a little different to what I had intended, and it became a catalyst for trying out more colorful and funky underpaintings in later works to see how this would affect the vibrancy and lend a nuance to the light. So, in that way it opened a door to experiment again with oil paints, looking to find new limits. 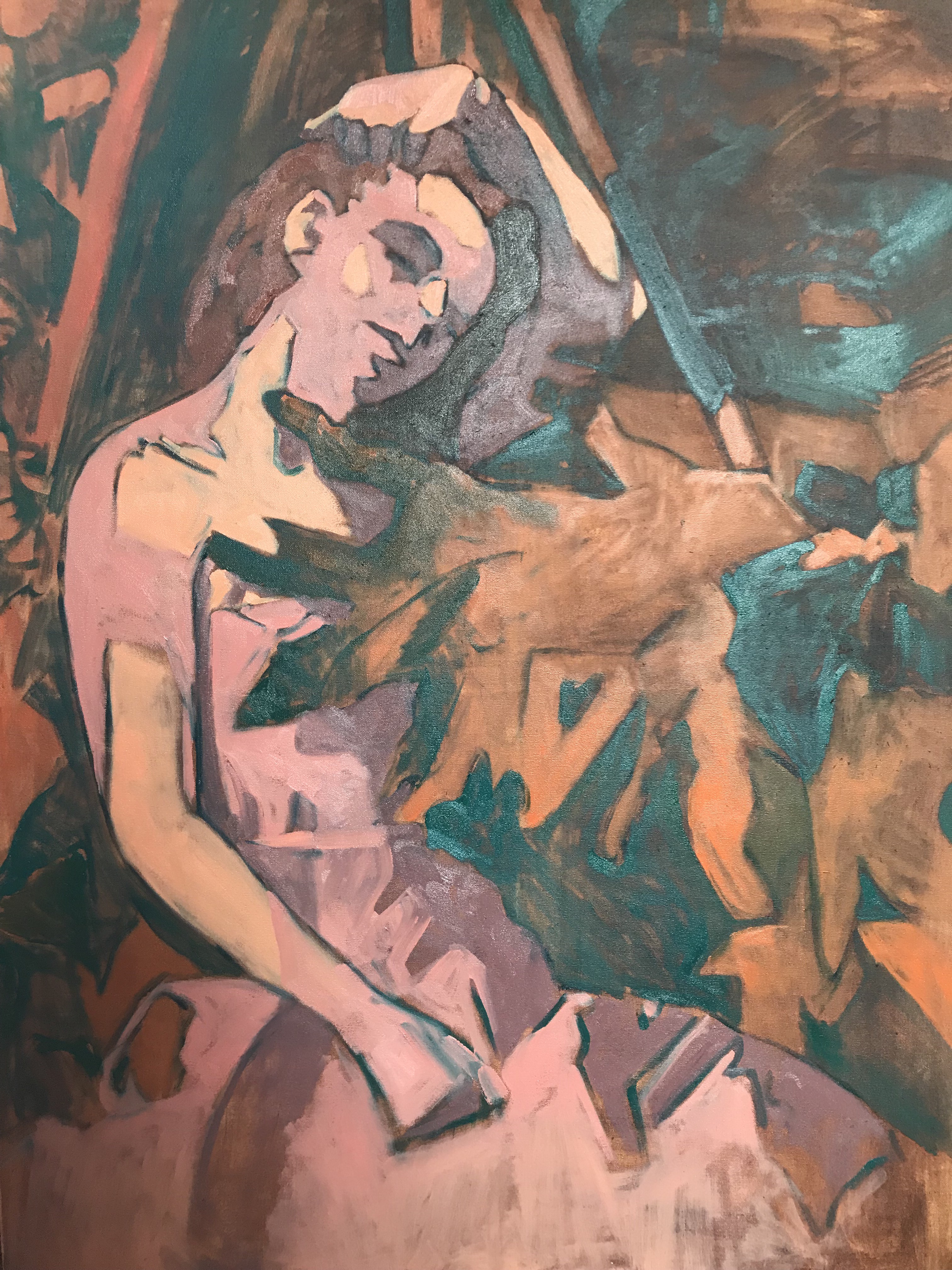 How do you make time to paint in your schedule? Does inspiration come to you at once or do you set aside time on purpose?

So for the larger paintings I tend to store up ideas until the holidays when I’ll just go on a spree of binge painting.  During term I keep a sketch book on me all the time, just a little pocket one, it’s just for jotting down ideas, life drawing and sketching people or compositions for paintings I might work up later.  Inspiration really comes in fits and spurts at fairly random times.  I find trying to force inspiration at a particular time just doesn’t work, a bit like when someone asks you your favorite film and then you can’t think of a single film let alone your favorite.

But on the other hand, if you have the inkling of an idea or a theme then setting aside time or just letting it mull over in the back of your mind can be quite good for developing ideas. Sometimes I know it sounds stupid but I genuinely have had dreams about some of these ideas and then have had to jot them down at about 3 in the morning, it’s a sort of ongoing thing.

I have been working on a project with a friend this term to do with muses which has been fun and a nice thing to run alongside the general hecticness of Cambridge.

Have you been finding time to create during lockdown? Does art help you get through times of stress?

Yeah lockdown has actually been really quite helpful for general painting productivity.  I’ve just been trying to get back into the swing of painting, it always takes a bit of time after a while away from it, I’ve been working on a series of “quarantine portraits” of everyone in my family as its quite rare at the moment that they are all home.  I haven’t started anything big yet just because of lack of large boards at the moment.  It has also been quite nice to have the time to experiment with different media without getting distracted or putting it off until I have time, so I’ve been working on a short film about light which has been fun, just in terms of teaching myself how to film and edit.  Other creative moments have included a cardboard puppet head the other day for no particularly good reason than I had a cardboard box that needed using and the time.

Art definitely helps me when I’m stressed.  I think it’s partly just the manual aspect of it, having something to do with my hands which also occupies my mind is just very calming.  It’s also an excuse to just have time in my own world. 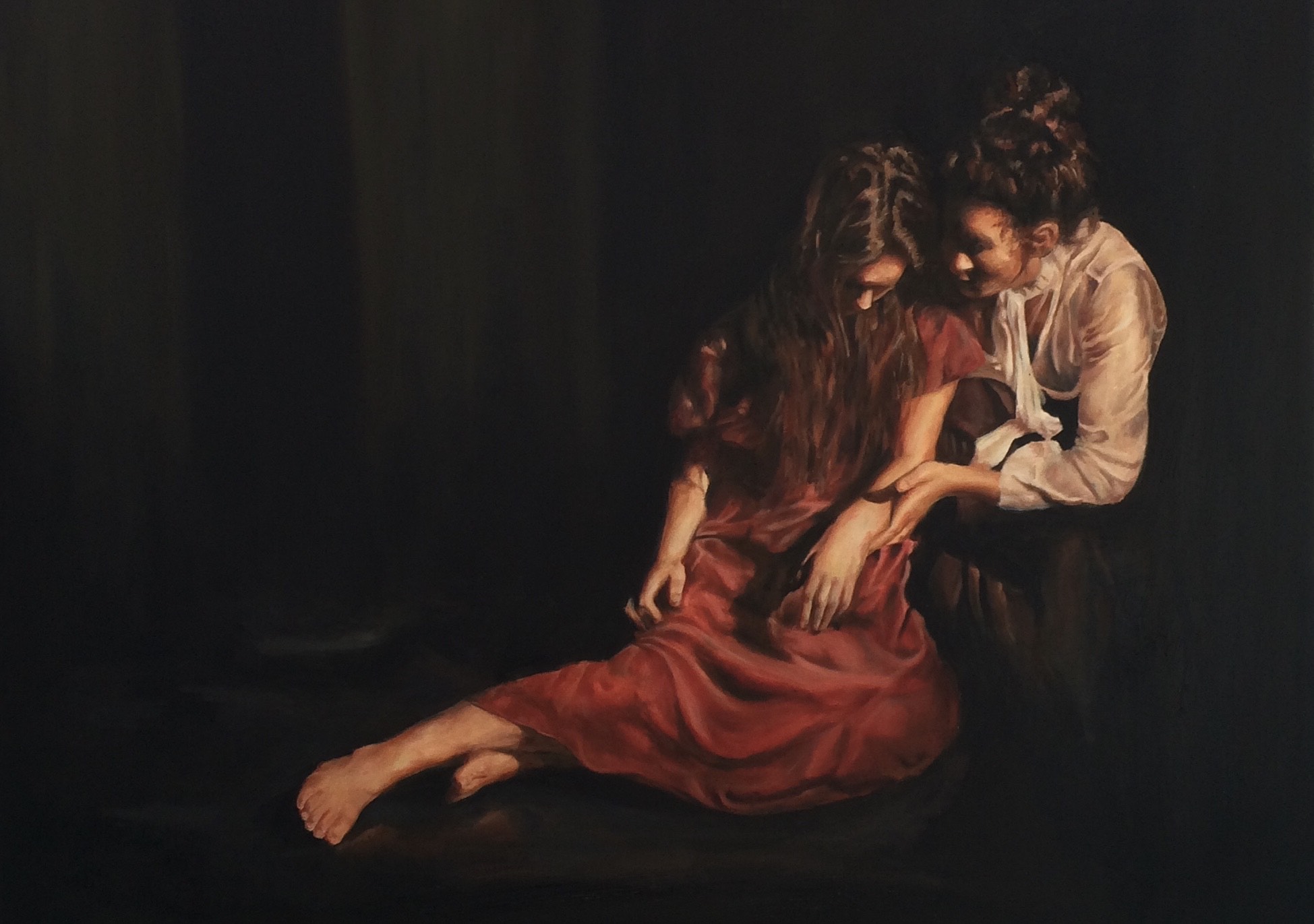 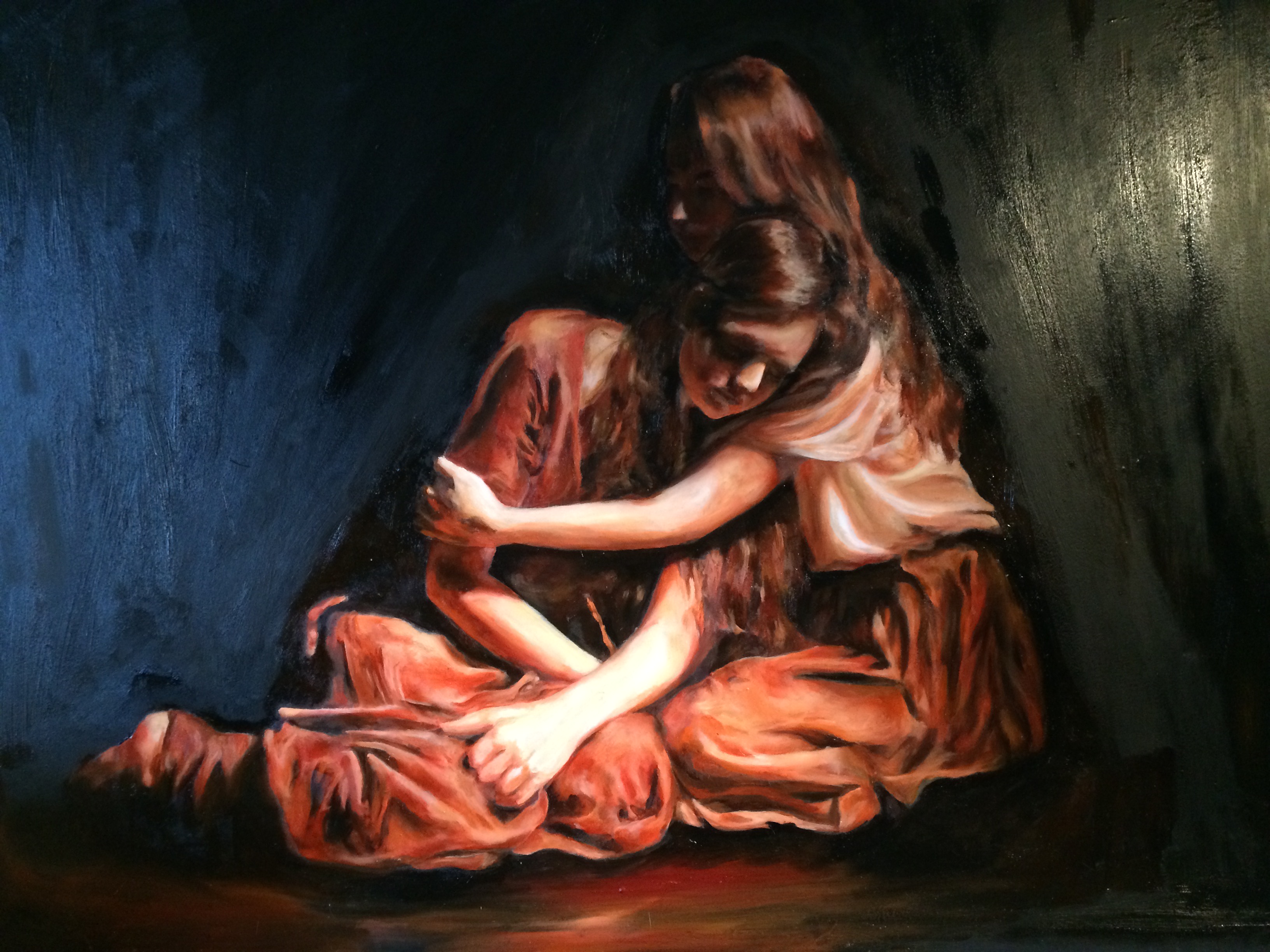 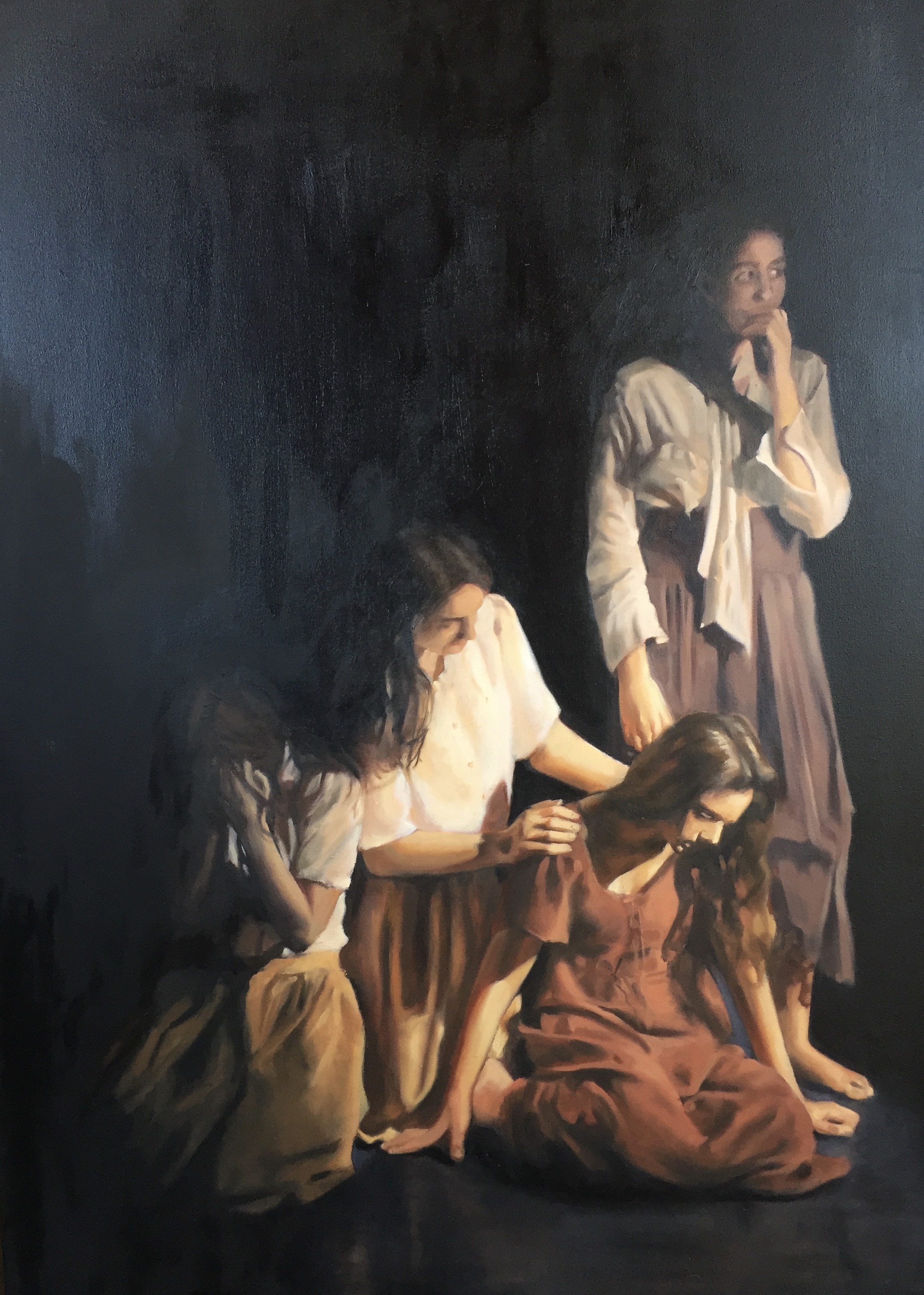