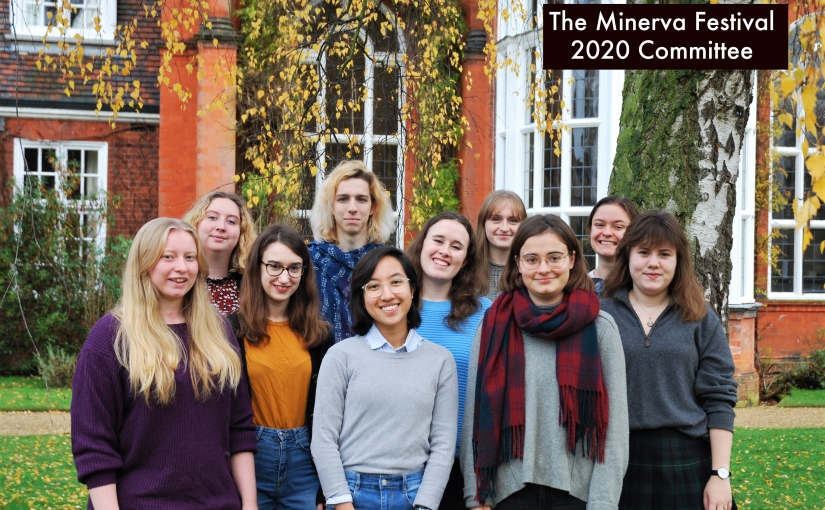 This week, we spoke to The Minerva Festival about the amazing work they are doing to help lift up the work of women and non binary composers.

The festival turns two this year! Could you tell us a bit about why it was set up in 2018?

The festival was set up by our 2018-19 chairs, Laura and Claire because they noticed that opportunities to hear music by women and non-binary people in Cambridge are rare and can often be quite tokenistic: most, if not all, of the music in the classical canon is by men and so it is unfortunately relatively common to attend concerts where all of the music is by male composers. Most of the music studied in the Music tripos is also typically by male composers and the number of female students who take the composition options is quite low. The festival (known in 2018-19 as the Cambridge Female Composers Festival) was set up, then, to try and remedy this by providing spaces to encourage the performance and study of music by women and non-binary people.

What barriers are still in place for women and non binary people in composing in 2020?

While many women and non-binary composers are active in composition at the moment, the fact that composition faculties are dominated by men, all the ‘great works’ a musician may ever play or study were written by men, and only male composers are deserving of a place in the concert hall, history books, and podiums gives the illusion that there is no historical precedent for what we do, and that we are alone. Even though women are now allowed to study composition, the socially and institutionally-ingrained idea of the male composer-genius are hard to defeat, and no doubt influence the way compositional endeavours by female and non-binary composers are received. Hence, while in 2020, equality seems apparent on the surface, we still have a long way to go to achieve true parity between genders.

How have you gone about finding music written by women and non binary people from history when they have been so overlooked?

There are some helpful online resources, such as the ‘1200 Years of Women Composers’ playlist on Spotify (https://open.spotify.com/playlist/7mgjMnYI9ERG1598WKpFUR?si=jFnjU8jqQ8uA3QcFDwc2cA). Twitter has also proved a useful tool for asking others for music suggestions which we may not have come across! Some people have also drawn upon their past performance experiences, although unfortunately it isn’t rare for people to have never performed music by a woman or non-binary person. It can be quite difficult to find music as, particularly in the past, women have had limited access to publishing opportunities; however, there is still a lot out there that is relatively easy to find.

Susan Rutherford has also recently taught an optional course called “Women in Music” in Part 1B of the Music Tripos, which has been immensely helpful in embedding female composers in their respective social and historical contexts, and introducing their works to undergraduates in an educational context. The inclusion of this course has definitely been a major step for the music faculty; however, one will still have to do much scavenging until female and non-binary composers are integrated into the compulsory history courses in schools and universities around the globe.

What made you want to get involved?

Hannah: The main reason for me was my growing frustration with the limited opportunities available to study music by women and non-binary people during the first and second years of my degree. Although studying this music would have been possible in coursework, they were literally non-existent when it came to lectures and supervision work. There was also a bit of a myth that went around that women didn’t really compose or that, when they did, it simply wasn’t very good… These frustrations inspired me to join the committee in 2018 as one of the recital representatives, so I could help show that this wasn’t the case and that it isn’t just men who deserve a place on the syllabus!

Leia: Since starting my degree at Cambridge (and indeed moving to the UK!) I have been extremely aware of the peripheral position I occupy in the Western Classical tradition, being both a woman and a person of colour. Although I knew of women of colour who were actively involved in Classical Music, we were not reflected in history and did not merit admiration as composers. So when I heard about the Cambridge Female Composers Festival as a fresher, I was very excited at the prospect of being represented, and that there was a group of people trying to correct these historical injustices in the most meaningful way: by sharing music. I attended as many of the concerts as I could, and remember being really moved by the closing concert. I joined the committee in 2019 hoping to continue the great work!

How has the festival been going so far?

The festival has been running since the end of January, and so far it has been going really well! We have held a number of successful events, including a jazz night, several evensongs and a coding workshop. We are also very grateful to everyone who has chosen to donate to the Cambridge Rape Crisis Centre (who we are supporting at each event), as our collecting tins are already getting full!

What are you hoping for the future of the festival?

We hope that Minerva will continue to run for as long as it seems to be making a difference! It will be a slightly bittersweet moment when we end as, hopefully, that will mean there is enough diversity in music being performed here that we don’t need to run a festival! In the meantime, though, we hope to continue running a successful recital and concert series and inspiring others to continue engaging with this music outside of the festival.

Is there anything in particular you’d recommend coming up?

Hannah: I am looking forward to our series of talks, beginning with Sarah MacDonald’s illustrated lecture on women and liturgical music on 21 February in Great St Mary’s.

Leia: I’m really looking forward to the closing concert on 8 March in St. Giles church – where we’ll be able to hear the choral work by the composition competition winner, alongside a whole Symphony by Alice Smith and the amazing Entr’acte for strings by Caroline Shaw. I’m a bit nervous, but I hope to do justice to the Shaw as a conductor!

For more information about the festival, visit https://www.minervafestival.org