It opens with a dim room, reminiscent of New York lofts. The camera pans towards our isolated protagonist painting his face, spotlighted by the warm bulbs lining the mirror. Zooming intimately in, we are brought face to face, almost uncomfortably close, with Joaquin Phoenix (playing Arthur Fleck, the man we eventually know as Joker) as he stares at his white-coated reflection. The camera draws to his hands hovering indecisively over the paints, fidgeting unsettlingly. It is this constant element of the unsettling that director Todd Phillips aims to portray throughout his film, which complements the prevalent dramatic irony. Arthur’s blank eyes starkly contrast the immediate moment after, when his hands physically contort his face into a smile, then into a sad face. With the last smile he pulls up, we see a teardrop through an extreme close-up shot, leaving a bead of blue eye makeup rolling down. 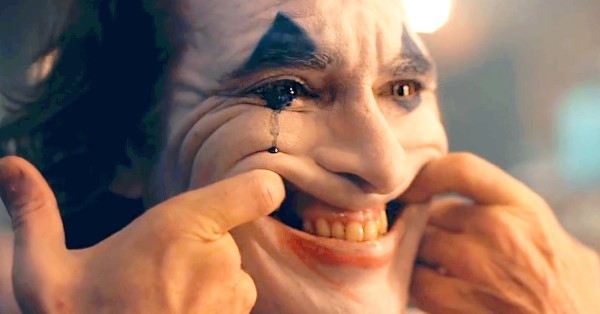 This powerful first impression struck a chord with me, as it likely did with others in the cinema that night—this act of forcing on a mask to conceal the turmoil underneath. Now the first R-rated film to make $1billion in global ticket sales since its official release on 4 October this year, Joker has become the most profitable comic book movie of all time, despite not being released in China (with the film’s political undertones, one could speculate why that is).

Following an impressive legacy of iconic Jokers (excluding Jared Leto, apologies Suicide Squad), Phoenix demystifies this infamous character through his performance tracing the origins of this supervillain, and perhaps simultaneously, explores the roots of many contemporary sources of evil. Co-written by Scott Silver and Phillips himself, Joker contextualises Arthur Fleck in his own life, constituted by unfortunate events and failed relationships, and a Gotham society proliferated by socio-economic inequality and increasing unrest. Arthur epitomises neglect and devaluation, both by the people in his life, as well as by wider society and the government. Contrary to fellow Marvel/DC comic book adaptations, Joker delves into the genre of psychological thriller, providing a plausible backstory of Batman’s nemesis—one that perhaps hits too close to reality.

Like many box-office films that have dealt with controversial themes, Joker has proved divisive. It has been criticised for being a “dangerous” film that is unnecessary when mass shooters, most of whom match Arthur’s profile (traumatised, radical, and lonely white men), are rampant across the US. Instead of condemning Arthur’s brutality, he stands atop a police car, glamorised as the revolutionary in the narrative of underdogs overthrowing elites. Phillips and the team have come under fire for glorifying violence, idolising the protagonist who “could easily be adopted as the patron saint of incels” (referring to misogynistic men sharing anti-feminist hate online). These are valid criticisms. Such a high-profile film carries the risk of promoting violence in popular media. And with its enormous success, some may argue, the responsibility of not perpetuating this culture of violence falls all the heftier.

However, the film equally had the productive potential for flagging the widespread inaction off-screen towards, and highlighting the urgency of confronting them. There appeared for me, elements of the everyman in Arthur, which could resonate (at least to some level) with individual viewers. Of course, one may argue that casting this cold-blooded killer under a sympathetic light unrightfully excuses his violence, as if experiencing suffering gives you an automatic green card to inflict violence. I think that would be oversimplifying. By creating this character who for much of the film, was grounded in the mundane rhythms of everyday life, as opposed to a larger-than-life supervillain persona, Joker points to how it could have been any of us.

Ultimately, Arthur Fleck was just an ordinary person. However, under those specific conditions, encountering certain people at those exact times, this man was moulded to evolve into what he became. In some ways, humanising the Joker to construct a somewhat relatable character, served as a tool to underline the role of wider social, political and economic structures. None of us are immune to them and therefore, any of us can be subject to their injustices as Arthur was, creating prime conditions for a dangerous downfall (or here, the rise of the Joker). Gotham’s issues parallel those in our off-screen world, such as gun violence, the declining welfare state, wealth gap, and treatment of mental health. The consequences of inaction (or indifference) by Gotham’s government and elites, proved dire in the film—a foreboding commentary on real life.

The film confronts the problematic aspects of the state and its elites, admittedly sometimes in a heavy-handed way, but gave me hope that a mainstream film unabashedly delivers important political commentary. The persisting theme of an indifferent, ineffective state that has consistently rejected its citizens’ demands, brewing long-term resentment that consequently sparks widespread chaos, reminded me of recent global protests—Iran, Chile, Lebanon and my home city of Hong Kong. The urban scenes in Joker looked eerily familiar.

Another significant issue is that of mental health, which our protagonist suffers from, along with chronic illness. Having been confined to a psychiatric ward previously, Arthur was categorised as needing to be treated, medicalised and segregated from society. His ill mother, Penny, is similar. Both their treatments have proved ineffective and lack sustained support for long-term recovery, paralleling the inadequate mental health support from real-life institutions. The recurrent motif of ‘putting on a happy face’ was instilled in Arthur early on, when his mother said his life purpose is to bring laughter to the world. Arthur’s case, albeit an extreme one, shows how negatively an individual can be affected. Although we have progressed, mental health remains a taboo subject, causing individuals to feel they need to literally mask their troubles, thereby preventing intervention where help is most needed.

Despite incorporating those aforementioned issues, one shortcoming is Joker’s representation of people (particularly women) of colour (POC/WOC). When it came to unpacking the casting choices of the main five women Arthur interacts with, I was stumped explaining the significance of casting WOC for four. This could be positive—Hollywood finally “blind casting”! I would suggest otherwise. The black women in the film lacked character development, basically just props to our white, male protagonist—visible but not seen. For example, Arthur’s delusional love interest, Sophie (Zazie Beetz), is a tired single mother living in a run-down building. This may be done to highlight how much the movie’s flawed society (thus, our flawed society) disproportionately disadvantages certain people facing a “double jeopardy” (being black and female). But all of their appearances are relatively fleeting, and nearly all meet ‘the struggling but strong black woman’ stereotype, which unintentionally burdens individuals and boxes WOC into a two-dimensional image. Phillips’ choice to cut the scene revealing Sophie’s fate, further causes us to scrutinise how much tangible progress is being made in diversifying the silver screen when the full stories of these WOC are essentially ignored and excluded?

Overall, despite its controversies, Joker is undeniably a thought-provoking film. The success and ethics surrounding how it deals with difficult subjects can be debated. Nonetheless, the fact the film got people debating in the first place, is in my opinion, more important than its flaws. It covers a plethora of highly relevant topics, with the productive potential of inciting conversations amongst viewers on topics they may not regularly consider, but as Arthur’s trajectory shows, indeed affects each one of us. If, as Phillips asserts, “outrage is a commodity”, then I think Joker mobilised it well.