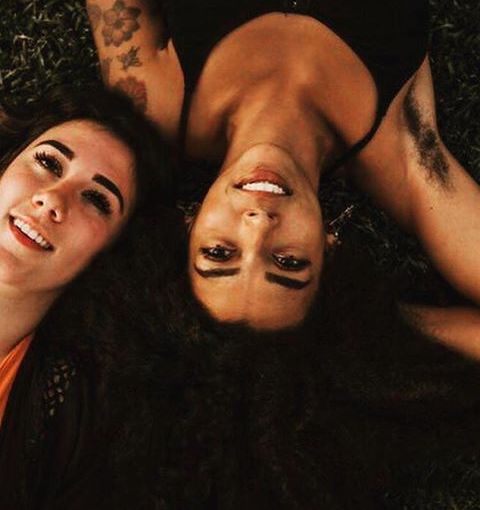 It was as if the stars had aligned earlier this month, when I first heard about #januhairy: a combination of my two favourite things, feminism and wordplay, it was yet another way for us women to stick it to the patriarchy.

I was initially impressed with the pun, as well as the concept and movement behind it (women ditching the razor for this month and baring natural armpits and fluffy legs on Instagram.) However, after thinking about it and discussing it a little more with some friends, made me realise that this movement, although so empowering on the surface, may need a little interrogation if it is going to move forward in the most positive direction possible.

Firstly, I’ll be showing solidarity in smoothness, which makes me feel a little guilty.

I have amazing respect for all the women baring the hair right now, and I’m thankful that so many girls and boys will be seeing at least some of our bodies in their natural state. But I’m also in awe of those women whose reason for defying this norm is because it’s what they want to do with their bodies. Of course, those posts which stick two-fingers up at the expectation for women to be silky smooth all over, those posts which say ‘I think I’m more beautiful like this and society needs to get its head around that’ are inspirational. But I’m not quite there yet.

The problem with the beauty standard of shaven armpits, legs, and everything else, isn’t that anyone – family, friends, current or prospective partners – forces women to remove their hair. What’s wrong, exhausting and anxiety-inducing, is that the standard is so pervasive that it becomes internalised. On billboards, on Instagram, on the women in the media who we think are beautiful, we just don’t see hair. It’s so normalised that we don’t think twice, after reaching a certain age, about the necessity of repeatedly, routinely pruning ourselves.

The common, pseudo-feminist (as I see it) justification is ‘I do it for me’. Meaning, I shave so that I feel beautiful, not because I think I need to for someone else. But isn’t it far more problematic that you only feel beautiful even to yourself when have you seen, felt or know that you are smooth all over? Isn’t it problematic that you feel beautiful only after having nipped yourself with a razor, or sat shivering on the floor of the shower for ten minutes, or gritted your teeth through a wax? And that you’ll have to do it all over again in a few days’ or weeks’ time? To make it worse, this ‘gain’ will run out in a few days at worst, and a few weeks at best.

We shouldn’t feel like bad feminists when we shave, and there are plenty of women who say that the choice to do so is just as valid and empowering as the choice not to.

But I can’t agree – or at least I think writing it off, even reclaiming it, as ‘our choice’ isn’t particularly helpful for the deeper issues at stake. I don’t think women have a choice, at least not a simple and easy one, when they would have to redefine what makes them feel beautiful before being made happy by that choice, when the liberation we gain from defying the standard is tainted by a suppression of those instilled instincts which make us feel better about our bodies with glossy legs rather than furry ones.

Secondly, is having one month where we talk about the problem with hair – and a winter one, at that, where it’s less of an ever-present concern for women – enough? I do think, especially considering the ‘guilty feminism’ I’ve discussed, that baby steps might be best. Internalised standards aren’t going away anytime soon – we won’t change what this generation, instinctively, holds to be attractive. But little-by-little exposure – maybe we could add a month every year, or hope that lots of women will bear the hair all year round after this #januhairy induction – is a good way to start.

Lastly, and most importantly, is this a very white, Western feminist issue?

I think when we talk specifically about the hashtag, probably. It’s a campaign for female empowerment, but most women Instagramming are already pretty empowered. But when we look deeper, at the reasons women are rejecting this norm, the wider implications are important on two counts. First: the problem with body hair is a double standard between men and women (rather than anything inherent in the act of shaving). And flagging up anything which places different, more expensive, more time-consuming, and more socially exhausting pressures on one gender can be a useful tool for prompting thought and discourse around other, more serious and detrimental inequalities. Second: placing expectations on women, their bodies, their behaviours, shaming them when they fail or refuse to meet those expectations, is one form of the patriarchal control over women which, in the UK and across the globe, has much more sinister manifestations.

But we should also be sensitive to the fact that some women will be more privileged in the extent to which they can join the movement and feel empowered by it. I’ve already spoken about how hard I would find it to let everything grow – but what about women of different ethnicities, women with naturally darker, thicker, or just more hair? They already have to exert a lot more financial, physical, and mental energy, shaving more frequently, struggling to wax or get laser treatment, and could easily feel excluded by a movement which focuses on a small selection of ‘acceptably hairy’ women.

Eventually, I hope that with a positive reception, support, women like @themamabelle getting stuck in and Instagramming it, more women can join in the movement. These are the women we need to be seeing, thinking about, and bringing aboard as we move forward so that #januhairy and movements like it can have an awesome impact for all.