In Old English the word for sunset was sunnansetlgong. It seems a strange word for such a lovely thing, with clunky consonants clinging onto the two syllables the English language has chosen to hold on to: sun & set.  But what is perhaps more strange, is the fact that there are always sunrises and sunsets, and there always have been. Over a thousand years ago, the same sun would disappear and the sky would – unless dense with clouds – glow somewhere on a soft spectrum between red and blue, and people would almost certainly notice and mention the sunnansetlgong, sharing the two of the same syllables that we form in our twenty-first-century mouths. It seems to be one of the sole certainties: that the sun will rise and it will set, the day will come and it will go.

Sunset did exist in Old English, and while it didn’t carry the meaning used today, it referred to the cardinal direction, ‘west’. Riding into the sunset, in spite of its typically romanticised connotations, is really a question of orientation. A sunset is a reminder of place and of direction, something that we have little need for in the digital age, where at no stage do you need to know whether you are heading north, south, east or west, we simply follow red virtual lines rather than being guided by the sun. However, when the sky is illuminated by the sun’s last light, we all turn to the west and try to capture it. Here is a selection of sunset photographs taken by members of the Girl Talk community. The photos are taken all around the globe, yet in each, the one certainty is that the photographer was looking to the west. There is some significance in this westerly gaze as the word ‘west’ is taken from the Latin term vesper meaning ‘evening star, evening, west’. So to admire a sunset is to look west, and to look to the west is to gaze into the evening. 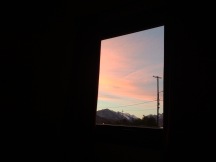 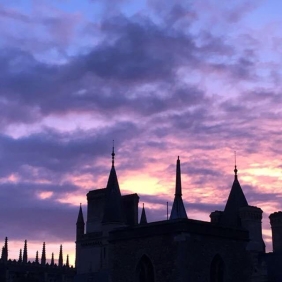 sunset from a room in Caius by @nadyadkelly

thank you to all photo contributors