This week the President of the United States and Leader of the Free World came under yet more criticism for reportedly telling his female staffers to ‘dress like women’. Naturally, a deluge of Twitter responses quickly followed with female doctors, sportspeople, soldiers, racing car drivers and even astronauts posting pictures of themselves to show Donald Trump exactly what women wear to work.

This was all an important reminder to check our inherent bias, and I was ashamed to feel even a tinge of shock from seeing a picture of a woman wearing such heavy-duty uniform or holding a gun.

However, what I immediately noticed was how slim the response from women in non-uniformed careers has been thus far. And this, presumably, because they really do have to #dresslikeawoman every single day.

Amongst the exceptions was the brilliant Caroline Issa, businesswoman and editor of Tank magazine, who posted a picture of herself in a lilac Alessandra Facchinetti suit and shirt combo with the hashtag #suitup. Similarly, this week fashion journalist Pandora Sykes wrote a piece in praise of her candy floss and fuchsia pink suits – ‘the perfect conflation of practical and fanciful, androgynous and feminine’. 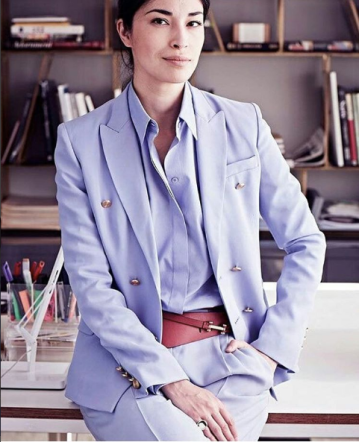 Of course, this is all well and good for two women who work in fashion. Female-dominated industries are the most open to sartorial freedom as women dress to impress each other, fishing for each other’s compliments.

But what about in the corporate world where, as much as you may want to, wearing a lilac or purple suit might not be office-appropriate?

Admittedly I’m still a student, but it still seems like a bit of a mystery as to where most women actually buy their work attire. Whilst male tailoring is commercially ubiquitous, I have always had the impression that women’s suiting is rather drab, uninspiring and ill-fitting: an afterthought for retailers such as H&M with most women just picking and mixing various pieces to create a smart outfit.

There’s more margin for error. Whilst a man wears a suit, a woman wears a blouse or a masculine-tailored crisp white shirt and tapered trousers. She can wear flats, heels or kitten heels; tights or not tights; patterns or plain; makeup or none; hair up or down and a million different skirt lengths or necklines. Whereas a man’s work uniform open to little ambiguity, there exists a plethora of choice for women. It is virtually impossible to be neutral and she can and so might be judged for whatever decision she makes.

When women first properly started to enter the workplace on a large scale in the 1950s corporate-style female suits as we now know them just didn’t exist. Women would just dress in their smart clothes – check out Peggy and Joan’s wardrobe in Mad Men to see what I mean. Later, towards the end of Second-Wave feminism, in the late 1980s, the phenomenon of power dressing emerged, with women dressing in shoulder pads and female versions of masculine suits in order to catch up with their male counterparts and counteract sexism in the workplace –the 1988 film Working Girl is a brilliant example of this. However, the various accoutrements of femininity still remained: big hair, high heels and pronounced makeup.

In her seminal essay ‘Womanliness as Masquerade’, Joan Rivière analyses women who “wish for masculinity” and so put on a “mask of womanliness” in order to compensate for her difference and insecurities, so disguising their fundamental ‘masculinity’ and so their desire to get ahead. I disagree that woman should feel they have to dress like men to be their equals, however equally it seems unfair, that in a world where ‘serious’ men get to wear monochrome, women have no choice but to highlight their difference everyday.

Even our Prime Minister, Theresa May, is constantly scrutinised for her wardrobe. Amal Clooney’s outfit choices and love for Giambattista Valli seems to garner more attention that the seismic human rights cases she works on. Whilst I firmly believe that fashion is something that should be celebrated and enjoyed, it should also be ignored if it isn’t relevant to the conversation.

Ultimately, it comes down to this simple conclusion: What you wear shouldn’t matter and it’s what you say and do that counts. As one Twitter user pointed out in her handy 140-character guide for Trump on how to #dresslikeawoman: 1. Identify as a woman. 2. Get dressed.

Main image: Hillary Clinton by Annie Leibovitz for Vogue US